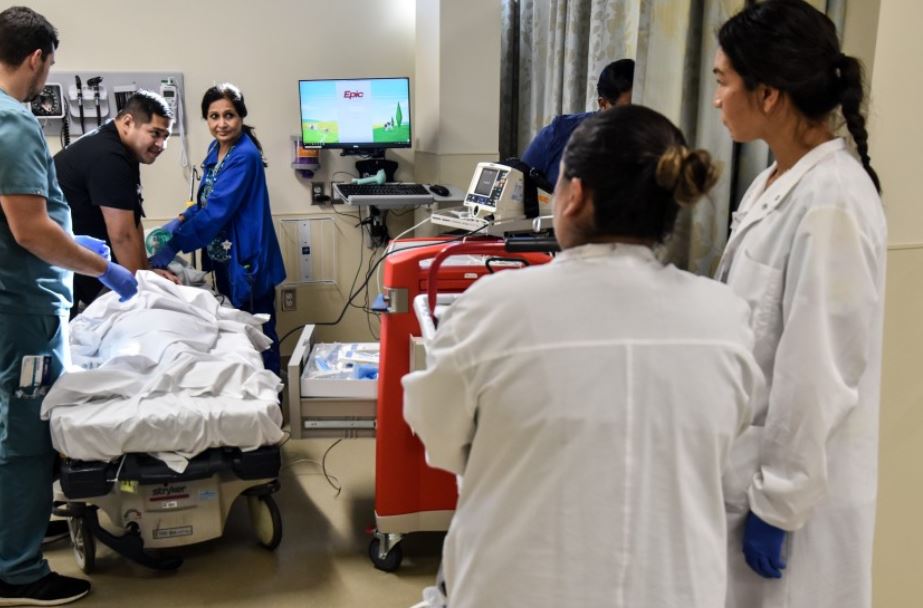 Patients are sure to notice the increased bed space, more spacious waiting room, and fresh finishes of the new emergency department at Alvarado Medical Center, but those who will work there every day are most impressed with the sheer gain in square footage

Since the La Mesa hospital opened in 1972, its emergency operations have been confined to a long rectangular room on the ground floor of its main tower. Not particularly expansive on opening day 47 years ago, the space has only grown more cramped as the ever-evolving demands of modern medicine have crammed the space with technology, leaving little space between the unit’s nursing station and its 12 curtain-separated beds.

But the new unit, built from the ground up to serve its specific purpose, has considerably more elbow room with 20 beds spread across a footprint that’s more than double the size of the original space. It is a vision that has been discussed at Alvarado for decades and one that registered nurse Chris Cummings, who has worked in the existing emergency department continuously since 1978, said he thought might never arrive.

“We’ve been waiting for it for a long time,” Cummings said. “The size, the number of beds, the technology and systems that are built-in and out of the way, it just gives a sense of pride.”

Emergency room work, after all, is unpredictable and tends to send workers rushing to the bedside on a moment’s notice. In the existing ER, he said, medical personnel need to work with the coordination of submariners to get the job done.

“We’re constantly bumping into each other in very small spaces when you need to have two or three people occupying the same area at the same time,” Cummings said.

In addition to having nearly three times the square footage, the new $14 million facility, which is the first expansion of Alvarado’s footprint since its western tower was completed in the late 1980s, includes 20 beds, nearly double the number available in the existing ER which will be remodeled and put back into use, likely as a “fast track” urgent care unit for those with less-severe injuries and illnesses.

The new facility bucks the local trend of private emergency rooms that has been adopted by most of the new emergency departments opened in San Diego County hospitals in recent years. Robin Gomez, Alvarado’s chief executive, said that’s by design. While some beds are in private rooms, especially those beds that offer “negative pressure” ventilation systems that can keep airborne infections from spreading, Gomez said having most beds separated by curtains can improve operational efficiency.

“It can be faster for staff to move from patient to patient, and that played into the design we chose,” Gomez said.

The new ER also has a geriatric certification from the American College of Emergency Physicians, signifying that its staff has been trained, and its physical layout is designed to meet the specific needs of seniors. Some elements are about how routine care is performed, such as routinely checking for symptoms of memory loss while other aspects have to do with choosing beds and other equipment that make examinations easier for those who may have mobility problems.

The new facility signals a shift in Alvarado’s operating philosophy. Designed to serve mainly as a surgical hospital and with a history of high-flying cardiac and cardiovascular care, Alvarado is moving more directly into the role of a community hospital, seeking to serve those who live closest to its campus just south of Interstate 8 and just west of Lake Murray Boulevard.

Through its history, Alvarado has had little control over whether or not residents who experience medical emergencies close to its physical location arrive in its ER. Because it is not under contract with the county to operate its own emergency medical system base station, paramedic crews often work directly with neighboring hospitals that do have such capabilities.

Operating a base station requires an emergency department to meet a range of criteria, including staffing specially-trained nurses or physicians round-the-clock to communicate by radio with first responders in the field, taking charge of the patient remotely with the understanding that he or she will soon be transported to the ER that assumed the responsibility.

Gomez said that Alvarado’s new emergency department is designed to meet requirements for the hospital to run its own base station. Staff, she said, has already met the requirements to be a stroke and heart attack receiving center, and Alvarado’s recent quality scores from outside organizations such as The Leapfrog Group and the Centers for Medicare and Medicaid Services have been top-of-the-scale.

“There is no doubt that the other ERs around me are overloaded, and we are working with the county to explore a base station,” Gomez said.

The county’s Emergency Medical Services division has final say on whether or not to expand the base station network. Taking such an action, according to guidelines posted on its website, requires “demonstrated local need” which can be determined by analyzing local emergency call volume and other factors.

Dr. Kristi Koenig, director of the county emergency medical services, said in an email that while adding capacity, as Alvarado has done, has the potential to alleviate stress across the system, expansion of the existing base station network is a more in-depth process.

Dr. Ted Mazer, an ear, nose and throat specialist who has had operating privileges at Alvarado since 1988 and who was medical chief of staff at the hospital when it was purchased by Prime Healthcare in 2010, said the base station issue has cropped up in cases when patients have existing long-term relationships with Alvarado physicians. Ambulances often routinely take emergency patients to Sharp Grossmont and Scripps Mercy Medical Center in Hillcrest, even if they live closer to Alvarado and indicate that they have an existing relationship with an Alvarado physician.

“The goal is to make sure that we’re not bypassed, particularly for patients who have chosen to make Alvarado to be their base hospital,” Mazer said.

Ontario-based Prime Healthcare’s operation of Alvarado has not been without controversy. Without admitting to any wrongdoing, the health system settled a whistleblower complaint that alleged fraudulent billing of Medicare made by Alvarado’s former director of performance improvement for $65 million.

Mazer, who continues to serve on the hospital’s medical executive committee and who recently served as president of the California Medical Association, has not always agreed with the parent company’s actions but said he has nothing but applause for the new ER. Previous owners, he said, failed again and again to meet the obvious need.

“In terms of the goal of building a new ER, which has been around for probably 30 years, everybody talked the talk, but they walked the walk,” Mazer said.

Increasing quality scores, he said, have raised the morale of Alvarado’s medical staff and that, he said, is down to leadership.

“A lot of that goes to Robin’s leadership and her ability to start working better with medical staff leadership,” Mazer said.

It is not clear exactly when Alvarado’s new emergency department will begin seeing patients. The California Department of Public Health still must give a final sign-off before the new facility can open. For now, training exercises are the only activities allowed. However, the public will be able to get its own look at the new digs on Dec. 5. A ribbon-cutting ceremony scheduled for 11 a.m. will be followed by tours until 3 p.m.