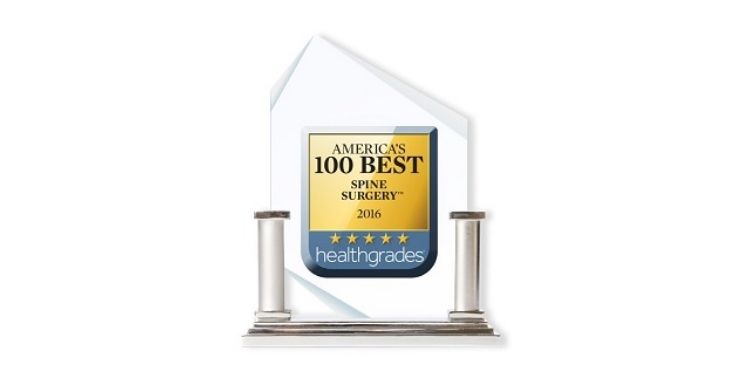 Alvarado Hospital announced today that it is the only hospital in California to be named America’s 100 Best Hospitals™ for Orthopedic and Spine Surgery four years in a row (2014-2017), according to Healthgrades.

Healthgrades, the leading online resource helping consumers make informed healthcare decisions, evaluated nearly 4,500 hospitals nationwide for 34 of the most common inpatient procedures and conditions.* Healthgrades identified the 100 best-performing hospitals across all conditions or procedures evaluated within orthopedic and spine surgery.

“To be ranked in the top 100 of nearly 4,500 hospitals for orthopedic and spine surgery speaks to the caliber of our staff and clinicians and the excellent care our patients have access to,” said Robin Gomez, Alvarado Hospital administrator. “We know we attract the best orthopedic and spine surgeons in California, but it is rewarding to have it recognized statewide and nationally.”

The achievement is part of findings released today in the Healthgrades 2017 Report to the Nation. The new report demonstrates how clinical performance continues to differ dramatically between hospitals nationally, regionally and at the local level, and the impact that this variation may have on health outcomes.

Healthgrades compared Specialty Excellence Award recipients as a group to all other hospitals as a group, and found:

Alvarado Hospital also is among the top 5% in the nation for clinical excellence and patient safety in 2016 as named by Healthgrades. To see a full list of Alvarado Hospital national achievements, click here.

**Statistics are based on Healthgrades analysis of MedPAR data for years 2013 through 2015 and represent 3-year estimates for Medicare patients only.

About Alvarado Hospital: Alvarado Hospital is among the nation’s top 5% for clinical excellence and patient safety (2016) as named by Healthgrades. Alvarado also is among America’s 100 Best Hospitals for critical care (2016), orthopedic surgery and spine surgery (2017). Home of the first hospital-based sexual medicine program in the U.S. and a regional referral center for acute rehabilitation, Alvarado offers more than 15 acute care and outpatient services and programs in a 306-bed hospital located adjacent to San Diego State University. For more information, visit AlvaradoHospital.com, call (800) 258-2723 or (619) 287-3270 or email AlvaradoHospital@primehealthcare.com.