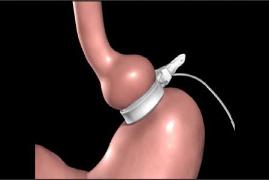 Approved by the FDA in 2001, gastric banding (or Lap-Band) is one of the least invasive treatments for morbid obesity. It induces weight loss by reducing the capacity of the stomach, which restricts the amount of food that can be consumed. Since its clinical introduction in 1993, almost 150,000 banding procedures have been performed around the world and more than 30,000 in the U.S. alone.

In 2011, the FDA approval expands the use of the Lap-Band to include obese individuals with a BMI of 30 to 34 who also have an existing condition related to their obesity.

During the procedure, surgeons usually use laparoscopic techniques (using small incisions and long-shafted instruments) to implant an inflatable silicone band into the patient’s abdomen. Like a wristwatch, the band is fastened around the upper stomach to create a new, tiny stomach pouch that limits and controls the amount of food you eat. It also creates a small outlet that slows the emptying process into the residual stomach and intestines. As a result, patients experience an earlier sensation of fullness, making it easier for patients to lose weight by consuming less food.

Since there is no division of the stomach, the gastric banding procedure is described as being less traumatic compared to other weight-loss surgeries. As with the gastric bypass, the laparoscopic approach to the surgery offers the advantages of reduced post-operative pain, shortened hospital stay and quicker recovery.

To modify the size of the band, its inner surface can be inflated or deflated with a saline solution. The band is connected by tubing to an access port, which is placed below the skin on the upper abdomen during surgery. After the operation, the surgeon adjusts the amount of saline in the band by entering the port with a fine needle through the skin.

Generally, patients require at least 6-12 adjustments in the initial months after surgery to obtain the appropriate degree of “tightness” to feel full on an appropriate amount of food. The band may require further adjustments as months and years pass, so patients need to be committed to frequent doctor visits.

For more information on Alvarado’s Surgical Weight-Loss Program, contact us at 619-229-7019. 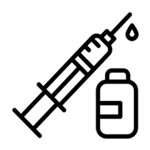